NASA's most recently launched earth-observing satellite, Suomi NPP, is proving to pack both beauty and brains. Since its launch into space in October, Suomi NPP has taken some of the most stunning images of Earth ever generated and, at the same time, has begun to collect critical data about Earth's environment and atmosphere. The satellite, the product of a partnership between NASA, NOAA, and the Department of Defense, carries five instruments that collect a host of important information including sea surface temperatures, levels, and measures of biological productivity on land and in oceans.

Suomi NPP received significant attention in late January and again in February for its latest Blue Marble images stunning, high definition composite images of Earth from space. January's Blue Marble, which shows Earths western hemisphere, immediately went viral after its release. The photo-sharing site Flickr reported that the image received more than 3.1 million views as of February 1, making it one of the most viewed images in the site's history after just one week on the web. February's image shows Earth's eastern hemisphere and was created from data collected during six orbits of Earth. 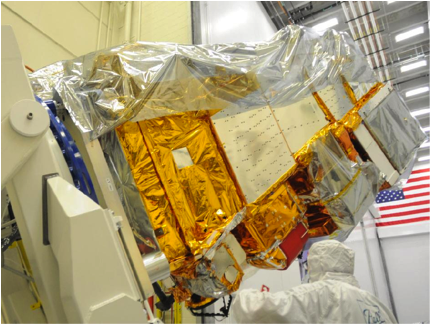 But while the satellite is churning out eye-pleasing images, it's also busy collecting data that will help us better understand how Earth is changing. Among the five instruments aboard the satellite is the latest version of the Clouds and the Earth's Radiant Energy System (CERES) which measures Earth's energy budget, or balance of incoming and outgoing energy. Having accurate, timely measurements of minute changes in Earth's energy budget is crucial to increasing our understanding of long-term , including the potential impacts of heat-trapping gasses on ocean and atmospheric temperatures and  sea-level.

At the same time, the Visible Infrared Imaging Radiometer Suite (VIIRS) instrument is monitoring cloud systems, which strongly influence Earth's energy budget by either reflecting incoming sunlight or blocking energy that would otherwise radiate into space. Scientists want to understand the effects of such cloud characteristics as thickness, altitude, and distribution on energy budgets and climate change.

As Suomi NPP continues its anticipated 5-year mission, meteorological and earth scientists around the world will gain new information to better understand how Earth is changing. We'll also be sure to see more beautiful pictures of our planet.

On the release of NCA4 Volume II and SOCCR2: A letter from the Acting Chair of the Subcommittee on Global Change Research and our Executive Director